Last summer I spent some quantity time with my brother's friends and ended up with the plot for an actual NEW online Choose Your Own Adventure by the end of the day.  Yes, that's right, it's a Choose Your Own Adventure that I did not write when I was eleven!  You play the part of a blue ninja of unspecified gender on a mission to rob a charity walk-a-thon of its root beer.  I'd originally intended for it to be very straightforward, but then I wound up accidentally throwing in this weapon system.  That clogged the pipeline for quite a bit.

After working on this off again and on again over the summer, I've finally finished writing the story and mapping out the flowchart for The Great Root Beer Heist.  You can expect to see 17 unquestionably bad endings and 6 endings that range from dubious at best to very good for the player.  You can also expect to see the ninjas depicted below. 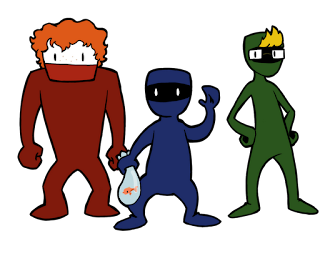 In light of this accomplishment, I've decided to share the process I've been using to create these things.  It all starts with a red composition book. 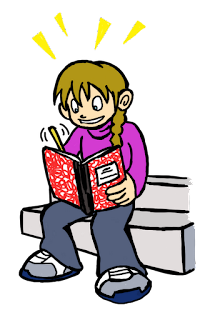 It has to be a red marble composition book.  I hoard the things like it's nobody's business and that helps keep them straight.  Of course, back when I started doing this I didn't have much of a choice.  They didn't really sell composition books in anything but marble style, and the red color was actually a huge novelty when I was in the fifth grade.  Now that I have them in polka-dot, taupe, European-style, glitter, unruled, and holographic with built in strobe light effects, the red marble's really just to state that yes, this notebook contains Choose Your Own Adventures and their accompanying logistical flowcharts.

To put it bluntly, I just wrote the story out in a notebook.  This was also the step where I closed the project and called it a day back in the 90s.  I still like writing my first draft in a real notebook on a stoop or bench or someplace weird, because there's less Internet there to distract me. 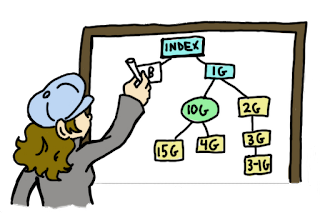 The second step is the one I just finished now.  I created a flowchart so I know exactly what pages need to be done.  As I finish them I fill in the little bubbles with a colored pencil or something.

I definitely do not actually perform this step on a large white board set up in public.  This is probably the worst way to make a flowchart, actually.  People around here have an overwhelming tendency to see important things written on erasable surfaces and erase them.  I use regular paper instead, because filling in the bubbles with a real colored pencil is a lot more satisfying than filling it in with the paint bucket tool in a separate tab. 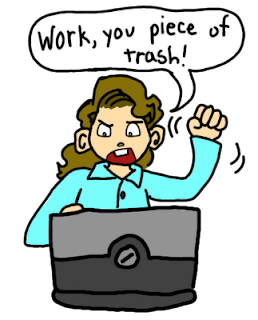 I don't even start doing anything on the computer until this is done.  I make the images first because there is a 100% chance of the image above not actually happening with that.  I set up the page in Dream Weaver and keep it simple.  Image, block of text, links at the bottom.  Boom.  Done.

And this is why there hasn't been a Lu Encounter update in over a month.

Posted by Zelda Vinciguerra at 7:23 PM No comments: