Why aren't pineapple Twizzlers a thing?

I found myself awake in the middle of the night again last night, as many creative sorts do.  Probably out of habit. Why is it that all the best ideas wait to show up until the middle of the night?  Why don't they cooperate with their host and pop up at more convenient times, when you're not trying to get some sleep?

I digress.  I found myself lying awake in bed, staring at the ceiling for at least thirty minutes wondering if Twizzlers came in pineapple flavor or not, for no real apparent reason, trying in vain to resist the urge to get up and google it (probably costing me an additional hour or so of sleep in the process).  Resistance was futile.  Turns out that Twizzlers do not come in pineapple flavor.  BUT THEY SHOULD, DARN IT.  THEY REALLY, REALLY SHOULD.

I then took it upon myself to draw some sketches of Minor 6th from the Amazing Harmonizing Police Force as a boy about to embark on a noble quest to save his homeland from invading forces.  He's one of those spry roguish sorts.  Because, you know, blog entries are always better with pictures.  It makes people more apt to read the text, after all. 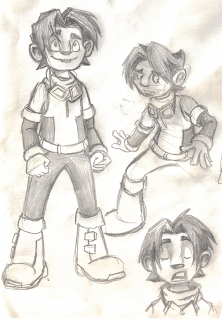 He looks oddly like the demon spawn of Raz from Psychonauts, Norman from ParaNorman, Timmy from the Fairly Oddparents, and Hub from Mega Man Battle Network.  As an adult he looks less like those guys and more like one of my old choir directors.

Posted by Zelda Vinciguerra at 4:09 PM No comments: