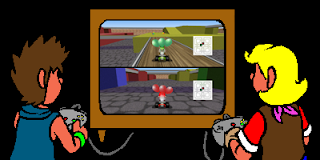 Hey guys!  Hey!  HEEEY!  Guess what?  My website has an arcade filled with all the random crap I've done!

I was a really prolific little kid when it came to writing.  Just this past week I finished drawing and coding another Choose Your Own Adventure entitled "Wish Upon a Nintendo 64."  If you didn't get enough death scenes and questionable fifth-grade-me-logic with the Prototype Lu Encounter, it's definitely worth a look.  Despite the wimpy-sounding title, this one boasts almost twice as many deaths as Protolu.  In fact, only two of the ten endings aren't awful, and they both have strings attached as opposed to flat-out getting to game happily ever after.

As far as plot goes, your evil and nerdy Uncle Bill decides to steal your Nintendo 64, and you need to go to absurd odds just to get it back.  Including risking lots and lots of gratuitous death.  It could practically function as a very intense Nintendo 64 ad.  "The Nintendo 64 is so great that most kids are willing to risk their lives to get it back from their evil uncles!  Buy one today!"

Fun fact: I took that opportunity to showcase my two favorite N64 games of all time.

Even more fun and factual: Neither of them were Ocarina of Time.  Even as a kid I still thought OOT was overrated.  Some things never change.
Posted by Zelda Vinciguerra at 10:20 PM