The Gasellschaft and I have a love-hate relationship.
The Gasellschaft is my truck. Actually, scratch that, it isn't my truck. It is my dad's truck. It is obscenely large, has custom, fixed side view mirrors designed for seeing around a horse trailer, an extra long bed, and an extra wide cab. It is quite possibly the most unwieldy vehicle short of a tractor-trailer and guzzles gas like no tomorrow, hence the name. It also completely dwarfs me to the point where, if you're not me, it's actually really funny. 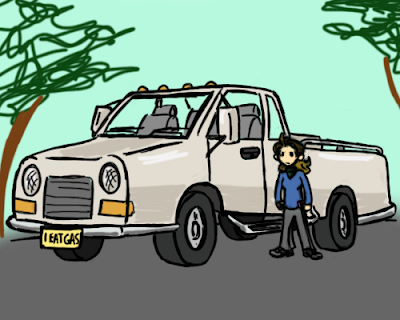 For now I'm stuck in New Jersey, where people pump your gas for you. These gas station attendants almost all think it's the funniest thing in the universe to see someone like me behind the wheel of something like that. Every. Single. Time. Once in Maryland I tried to park at a Panera with it and took so long to get it right that my friends had enough time to go in, see that the line was too long, and decide to just split up and get food elsewhere before I could get it in the space.

Half the time it doesn't even fit all the way into a parking space. If it were actually my vehicle it would definitely be a lot smaller and more sensible on gas. I am probably going to write a serious children's book about being relatively short and driving an obscenely large truck. Worse comes to worse I can sell it to gas station attendants in all two states that have them.

Anyway, about a week ago my dad actually used his own truck to take some garbage out to the dumpster on his other property. That's when a freak accident occurred! Here's what went down in the art style of Bruno Bozzetto:

It was a classic example of normal human drives truck on empty road, crazy idiot swerves normal human into only parked car on entire shoulder, crazy idiot does not stop at all and just drives off like a jerk. You know how these things go. The truck sustained internal damage that we thought was just a cracked steering column, so he got his friend the mechanic to tow it down to his shop and fix it up.
We thought it would only be like a week tops. They'd put in a new steering column and fix up the dents and badda-bing, here's your absurdly large vehicle back. I mean, I had places to go. Jobs to bag. Chums to see.
Unfortunately, this wasn't the case. A week turned into a week and a half and My Dad's Friend The Mechanic found he was having trouble aligning the truck to finish the job. He had to call in a specialist, who incidentally, happened to also be a friend of my dad's. This is just one of those towns where everyone's all in everyone else's business. Heck, I'm sure if I ever cared enough to get a boyfriend in this state, my dad would know who it was before I would, so many people know my dad.

So for now I am stranded here--stranded here moreso than I was up until this point--for 2 to 3 weeks. That means the Christmas decorations will be up until about Valentine's Day. Typically, my dad uses whatever truck he has at the time to take them to storage after the holiday season. That's the Gasellschaft for you. Can't live with it, can't live without it.

The good news?
I DON'T HAVE ANY CAVITIES!
Posted by Zelda Vinciguerra at 11:15 PM No comments:

Okay. I didn't expect to forget to post until the new year. Oops? Thanks for kicking the sense back into me, Matt. Not the Matt who's marrying Lauren. I've started a Matt collection since I last posted here regularly.

But you don't want to hear about any sort of Matt collection, do you? Of course not! You're probably here to hear about how CTNX2011 ended. Nobody likes a cliffhanger ending!

So before I left for Burbank, my mom came to me with one request that she insisted I fulfill during my stay there. No, not "get a full-time job doing that thing you love" or anything. She wanted me to buy myself a coffee mug and gave me money specifically to do that. I suppose using just any mug in her house is aggravating her OCD.

Now, this wasn't like one of those conventions where you can just walk up to the coffee mug table and buy a coffee mug. I'm actually not sure if those sort of conventions exist. I'm not exactly the most knowledgeable on the conventions of conventions. I did, however, spot a gift shop in the hotel. Unfortunately, that gift shop always seemed to be closed whenever I approached it, but there were DEFINITELY coffee mugs in there. 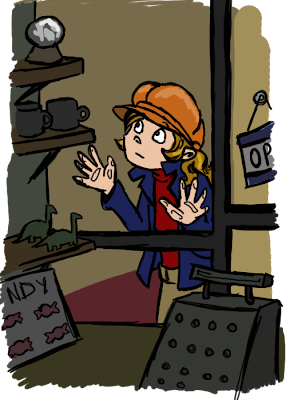 Thankfully, on Sunday morning, I managed to catch it during the hour it was actually open. And I did find a coffee mug that I really liked, too. They put the wrong price tag on it, but it was still in the allocated Coffee Mug Budget, so I snapped one up before the store closed on me. 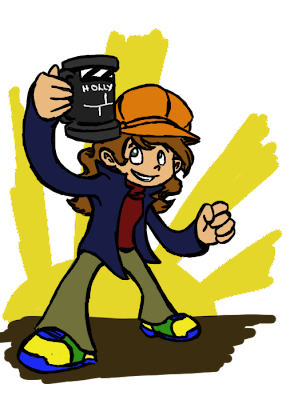 As with all two of the conventions I've attended in my lifetime, the last day was abbreviated. I did run into Bobby Chiu again. I picked up his book after I caught an inspirational speech he was giving someone else that pretty much validated my decision to opt with Ellen's book instead of the sandwich. It's nice to have a lot of heroes you can mentally interview for inspiration. Maybe one day I'll hold the record for having the most!

I picked up as much free stuff as I could before the floor closed, and reconnected with Twi after finding his business card lying around. It was actually pretty lucky I'd noticed it, because he changed his contact info since the last time he gave me his card.

When I got back to the room, I finally met Jordan, with whom I'd been sharing the space this entire time. 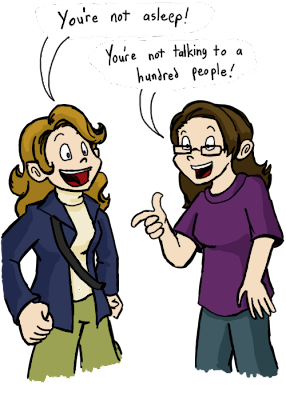 She turned out to be really awesome, and we watched YouTube videos and read Twilight sporks for a few hours before turning in for the night. Unfortunately she doesn't seem to have a portfolio site or blog anywhere yet, though.
I flew back uneventfully the next morning at noon, stopped once in Phoenix again, and did not purchase cactus seeds. I doubt I'll live long enough for cacti grown from seed to make a very effective privacy fence and child-deterrent anyway.

To end this CTNX wrap-up, I will leave you all, or at least those of you who know Paige's mom, with disturbing mental imagery of Paige's mom as Ursula from The Little Mermaid. You're welcome. Brain bleach is on the counter to your right.
Posted by Zelda Vinciguerra at 4:41 PM No comments: