This occurred at about 1AM in the midst of Finals Weekend. Since those days all blur together I'm going to guess it must've been this past Saturday. 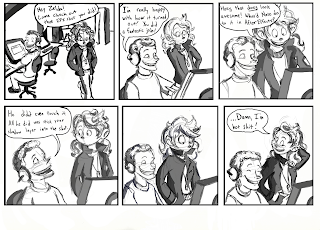 Anyway, that was me watching the shadows I animated for Matt Doering's drop-dead gorgeous film, Emma and Molly's Pet Yeti. One day I swear I will create a proper spoof of it starring old ladies, but for now I'm up to my eyebrows in 2D effects...and hooked on Irish riverdance music.

I kind of wonder how I'd react to my own work if I saw it after a good night's sleep...because I seriously didn't remember it looking that cool when I put it in my reel.
Posted by Zelda Vinciguerra at 11:38 PM 3 comments:

Incidentally, this is the first time I've ever pulled an all-nighter making fun of a professor in animated short format, but I did have a deadline to meet. Jacques is moving to NYC after this, so I had to have it ready before his sendoff party. It's really more of a Lacoste joke if anything--Andy Moxon (voiced badly by yours truly) was the photography professor while I was in Lacoste, and in the first week he told Jacques that he could walk to the next town over in less than thirty minutes if he followed a Roman road just outside of town.

Naturally, Jacques missed it entirely (it was pretty hard to miss once we did find it) and wound up taking all of us through the woods for about three or four hours. And from now on, Jon and Lauren and I have been calling airplanes Jacquestars.

So yeah, Thursday went well.
Posted by Zelda Vinciguerra at 7:46 AM No comments: