Technically two? Did I really not post a single thing in November? Ah, well, Finals does that to you. I actually did do some stuff for Production Design that came out...well, I think it's okay, but my professor thought it was stunningly awesome. Here are my costume designs for a hypothetical remake of Romeo and Juliet, set in Gothic, medieval England (c. 1300). Tybalt and Friar Lawrence meet to converse about Juliet's marriage, shortly after Lawrence marries Romeo and Juliet to each other...only Tybalt thinks the marriage they're going to discuss is Juliet's pending marriage to Paris. 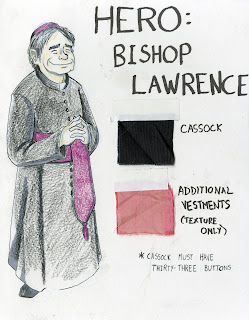 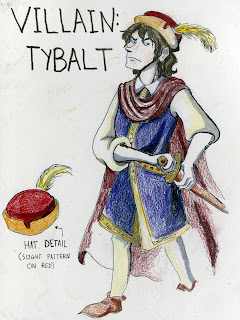 So...uh...yeah. Friar Lawrence has been upgraded to a Catholic bishop. I jacked the Montagues' and Capulets' social status to royalty in rival kingdoms, so I figured Romeo wouldn't be chatting up just any old monk.

I had more fun with Tybalt--I mean, Catholic Clerical Garb hasn't changed much in the past thousand years--but now that I look at this again his one visible leg looks waaaaaaay too small. Face, meet desk.

EDIT: Blogger thinks I'm in Pacific time for some reason. Trust me, it's really December.
Posted by Zelda Vinciguerra at 9:25 PM No comments: