His Name is Tonio

Got the new computer back inside the old casing. Funny thing is, this time it's a boy computer. I've decided to call him Tonio.

Only...now Patrick from the apartment upstairs went off to visit his family, like EVERYONE ELSE, so I can't leech his internet anymore. Nice and convenient that it should happen the day before I get a hold of a computer, eh? So now instead of having internet but no computer, I have a computer but no internet.

At least Jen Library's open, and not picky about how long you spend on a computer.
Posted by Zelda Vinciguerra at 3:17 PM No comments: 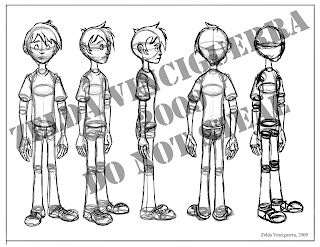 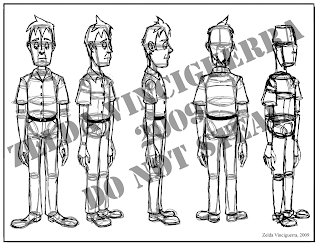 These were for Orey's senior project, Imperfect Serenity. The kid with the perspective queries earlier in the holiday season. Character designs aren't mine, art is. It's going to be 3D in the end but Jason required character turnarounds and his original artist bailed. Both were done in the dead of morning with roughly four hours of sleep to support my fragile sanity. Happy finals week!

Oh, and speaking of finals week, some moron tried to gutturally cram, shove, and stuff about fifty sheets of animation paper into the good hole punch in 321. The only good hole punch in Monty. Anthony was hopping mad when he found out. I hope he goes through the security footage and disembowels whoever did it.
Posted by Zelda Vinciguerra at 8:30 PM 1 comment:

One Scene to go, and Lemrex character concept

I finished the concept work on Lemrex for John's project, "April," yesterday evening. 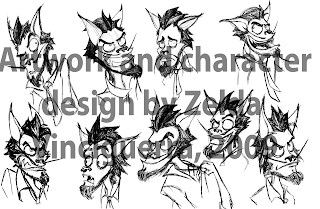 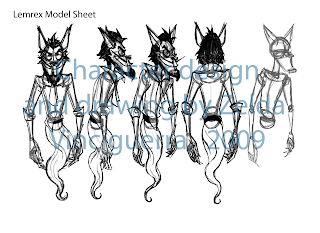 He should be fun to animate next quarter. Tons and tons of special effects and I haven't even TAKEN that class yet.

And speaking of effects, Professor Troy totally graffiti'd the whiteboard this afternoon. Welcome to the 321 Whiteboard Tag Force, Mr. Ninja. We salute you.

I'm also going to try my hardest to overhaul Foiled Again if I can get my computer back. Plus Jacquestar and Pasta Perils. And Monty!. That's six things if you toss Bit into the mix. I'm excited!
Posted by Zelda Vinciguerra at 7:07 PM No comments:

How I wasted my Finals Weekend

(To the tune of "The Jet Song" from West Side Story)

When you're EFX, you're EFX all the way
From your first in-between to retirement day!
When you're in EFX let 'em do what they can
You draw fire, smoke, water, and dust on command!
You're never alone
You're never disconnected
You're blowing things up
When character's affected
You aren't neglected!
Then you are set with a capital "E"
Which you'll never forget till they switch to CG
When you're EFX,
You
Stay
EFX!!!!!!!

I just realized I have absolutely nothing posted about my senior project. Oops? I mean, I've only been working on the thing for what, a quarter? Two quarters if you count Concept Development? In any case it's been keeping me from finishing Jacquestar and Pasta Perils.

I did it in Flash, frame by frame like "Finals Week," only the quality is going to be noticeably higher. And it's actually shorter, too. A little bit shorter. It clocked out at 40:16ish in the animatic. And I have twice as long to do it. Four times as long, really, because I knew what I was doing from the start of the first week of this quarter.

The story revolves around this bucket of bolts... 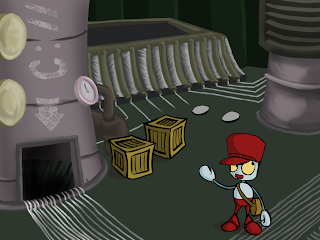 His name is Ignatius. Just kidding. It's Bit. He works inside a computer transporting files in little crates to different chutes that lead to different computer drives. Courtney Brooke Vaughan is doing the backgrounds and totally rocks hardcore for it. Expect the floor to be greener and the rest of the scenery to be grayer, though the coloring on Bit himself is pretty accurate. He also has a supervisor who is very much in charge. 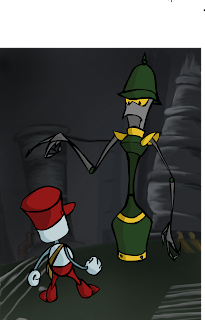 The story focuses on a specific incident in which his boss expects him to deliver a virus to the C drive. So far production's been a smash but cleanup is seriously tedious work. I have been deleting vectors for the past week and still have two and a half more scenes to inbetween. Pop seems pretty confident that I'll get it done but he doesn't know I still have Debber's final, a short story to write, and my friend John's character turnaround to finish.

I've taken a pretty lighthearted discourse in dealing with a *gasp* potentially serious subject matter (one of those "You can't control me" sort of deals that's cropped up in my own life as of late) and a couple of weeks ago I thought it was dumb. Especially the vector cleanup part. But last weekend after blitzing through Jason's concept class in a vampire cape on a quest for dry-erase markers, I wound up helping a guy out with perspective drawing and got some perspective of my own. His wasn't funny at all. It was craptastically serious and filled with symbological mumbo-jumbo. Every shot was carefully and deliberately planned even though he couldn't quite draw them out because he cared a ton about what he was doing.

I found more meaning in my conveniently brief project and might have to add an extra scene at the end. As closure. But don't tell Pop!
Posted by Zelda Vinciguerra at 5:41 PM 1 comment:

So Chair Moorshead found "Finals Week" after asking me to show a small tour group an example of some Flash work I'd done. I'd never even spoken to the guy before, aside from one brief time earlier in the quarter when he caught me snoozing on the fourth floor landing out in the stairwell.

I have now been summoned to appear in court before Paula Wallace to defend myself against expulsion on the grounds of the defamation of a SCAD building without prior consent of the school executives.

Just kidding. He liked it a lot and wants to see more.

I have been thinking about expansion so far and I have been doodling, too, but if I'm going to do anything about it, it's going to be a big endeavor getting a full-length musical at all. The title's been changed to Monty! The Musical and it now revolves around the heartwrenching tale of a building who wants to become a traditional 2D animator but doesn't have any arms or legs. Not quite sure how "Finals Week" would fit into it just yet, but I'll think of something.

What I'd really like to do is think up a musical number that would feature Monty himself. I did have something in mind about two years ago--an angsty emo song where Monty decides to throw a massive tantrum and crash all of the computers, one of those "NOBODY UNDERSTANDS ME" deals. Now, at least, he has some kind of motive behind the madness. I'll be employing the goofy face from Montgomery Hall's facebook profile to do most of the singing. It should be hilarious, especially if I get him smashing stuff with his rafters and locking people inside and whacking people in the head with projectors.

Shoot, I'd need a male singing voice too.
Posted by Zelda Vinciguerra at 10:12 AM No comments: 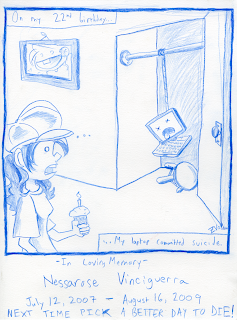 The good news? The hard drive was backed up and she was still under warranty.
Posted by Zelda Vinciguerra at 8:20 PM 1 comment:

I sucked it up and biked to Weston at about eight this morning with two overstuffed traffic-cone-orange pillowcases full of laundry gutturally crammed into the basket in the back. That's gotta be at least twenty blocks one way.

On top of that, I was dressed in pajama pants, one blue striped sock, one gray sock, a new yellow effeminate-looking jeep cap I got for my brother, and the top from my vampire costume (sans cape). All in 90+ degree, pre-thunderstorm weather, with my ID shoved into my mouth and my keys dangling around my neck on a Bud Light lanyard due to a severe lack of pockets.

All to spend two dollars to get a semi-moist yet still clean load of laundry.

I think if I were a celebrity, this would have made tabloids.
Posted by Zelda Vinciguerra at 2:27 PM No comments:

Tomorrow I may just have to come into class wearing my vampire outfit again because I have no clean clothes left. I'm even running low on socks.

This, of course, is the fault of the local handyman, who was supposed to have installed a washer/dryer at my apartment building months ago. I would go to the laundromat but that even is highly difficult seeing as my only mode of transportation is a bike, and it's quite a long ride.

On top of this I'm doing my senior project, some character animation, a creative writing class, and still finding time to make goofy cartoons about every professor in the department. AND my birthday is on Sunday.

I don't want to have to spend that in a two-year-old discount vampire costume. Not without a decent set of plastic fangs.
Posted by Zelda Vinciguerra at 12:55 PM 2 comments: