I am glad I recorded that track when I did. Now my voice is in no condition to be singing anything. Hopefully it'll be at least in shape enough to announce Mary Lou Davis for tomorrow for CAS. I keep listening to the music as I'm keying the scenes in and there are some points where I'm all like, "Yeah, I can definitely hear the sickishness creeping in there." It may be my perfectionist nature but I think I did like seven takes before I got something that sounded (in my opinion) okay.

Heck, I'll refrain from posting the song on this blog at all, because if I have learned anything, it's that stuff like karaoke starts out cool until you start forcing people to listen to it...over...and over...and over again. Then they start getting really, really annoyed, kind of like when you find a new song you like and play it nonstop for hours on end.
Posted by Zelda Vinciguerra at 3:46 PM No comments:

It's only expected that I'd forget the coffee the day the soda machine died and I haven't enough change in my pockets to compensate for the price-jack Byte's imposed on their own sacred stash of soft drinks. O sweet and glorious Vault, thou mockest me in thy caffeinated glory! Sold out, it says...sold out your face. Whosoever had that ingenious idea to put only one vending machine in a building where people often go upward of two days without sleep, it was--by far--a really lousy one considering the rate at which those things malfunction. And somehow this always seems to occur at the worst possible time (like 8 in the morning). I'm just about finished with the backgrounds. This one even comes with complimentary blue pencil shavings and eraser bits at the bottom of the light table, just like in the real Monty. I've also recorded the song, which I conveniently left in my other computer. Just like I left the coffee at my apartment.

I love Mondays.
Posted by Zelda Vinciguerra at 5:15 AM No comments: 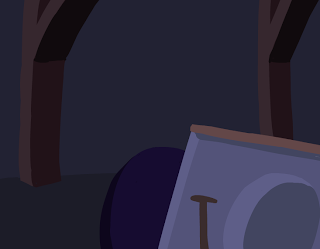 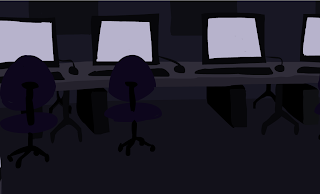 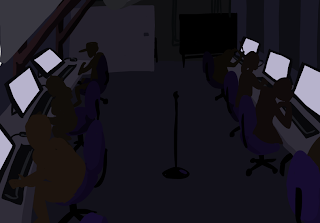 Here are some more Monty shots.
Posted by Zelda Vinciguerra at 5:13 AM 1 comment: 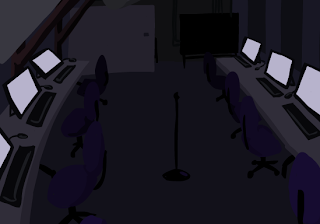 And here we have the star of the show...the one, the only, MONTGOMERY HALL!
Posted by Zelda Vinciguerra at 7:23 AM 1 comment: 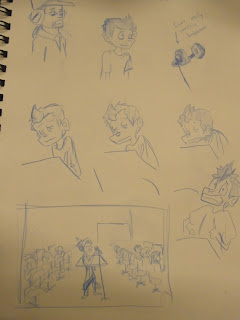 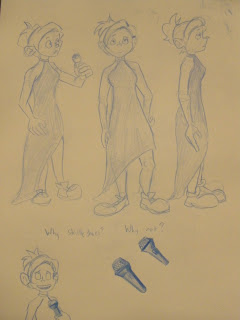 Okay, I get to engorge myself on Valentine's Day chocolate this weekend after all (really, those chalky heart candies are just not the same). Otherwise, it's background time.
Posted by Zelda Vinciguerra at 5:22 AM No comments: 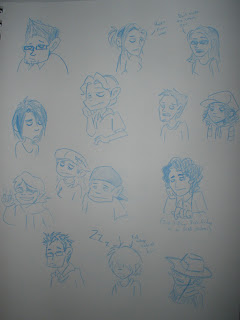 You know it's that time of the quarter when you're so sluggishly wiped out that all you can do is draw minor characters who are just as wiped out as you are. On the bright side I am passing 20th Century Art and Movement for Performance. Though some of those zonked out animators look awfully familiar (don't feel bad if you don't recognize them).

This was just one of those weekends that went by so quickly that Sunday felt like Saturday and Saturday felt like Friday, only it was one of those high school Fridays where you have to go to class. So today I will churn out even more characters and finalize my lead. And if I haven't, I will not eat chocolate for an entire week.
Posted by Zelda Vinciguerra at 5:12 AM 2 comments:

I finished the tutorials. *Collapses in triumph*

If I had the time I would have definitely reworked this thing like I did with the clown puppet. His steps are too big and his lateral movement is too fast. Yes, that is a trowel on his left hand, they were all out of pirate hooks. Mike Trowelenheimer was a fabulous television extra before he became a pirate anyway, and he still thinks anyone who talks to him wants an autograph.

Ah lip sync...serious proof that Voice for Performance wasn't a waste of my time and that I really do always get cast as a blonde kid. Plus, making the goofy facial expressions is priceless and scared the cheese whiz out of my flatmate.
Posted by Zelda Vinciguerra at 4:51 AM No comments:

Long Live the Green Cowboy Hat with the Tiara on it!
Posted by Zelda Vinciguerra at 6:17 AM No comments:

Note: This file is a working copy and thus highly subject to change

SCENE 01
Long shot on a typical animation classroom. Our lovely and talented singer walks up to a long microphone inexplicably placed between several rows of computers and light tables. A spotlight lights up the area around the mic
SFX: That reverberating clunk that happens when someone turns on a spotlight in a large theatre

She picks up the mic.
SFX: Little bit of mic static. Then the song starts and plays for the duration of the animation. You know, that song from the fourth or so post? Yes, that one.

SCENE 02: "...Files rendering for three days straight..."
Profile CU on the diva. Behind her, a static row of exhausted animators are working on computers. One of them, however, is not a background element.

"...Blue screens flicker into sight..."
The animated computer screen flickers blue, insinuating a Blue Screen of Death. The student sitting at the computer yanks at his hair and collapses onto the desk, trembling as though he'd forgotten to save.

SCENE 03: "...Zombielike students with red, bloodshot eyes..."
Pan across rows of stationary, monstrous-looking, sleep-deprived students, all slack-jawed and numb-looking as the screen rests on the star of our show in the background, still illuminated by the spotlight, as she makes her way stage right.

SCENE 04: "...Will find it hard to sleep tonight..."
The Animation Diva approaches a boy half-dozing at a light table and pokes him for a laugh. He spazzes out a bit and glares at her as she scuttles off before he can do anything evil in return.

SCENE 05: "...They know exams are on their way..."
A.D. slides back into the spotlight in a dazzling display of showmanship as she leans back into the musical phrase to belt the lyrics out for the rest of the animators.

SCENE 06: "...And they'll all scramble, rush..."
Another boy scribbles furiously on another light table with a grin, clearly rushing.

SCENE 08/09: "...And their professors sigh because they know that those assignments were assigned weeks ago..."
Not sure what to put here. Rain check?

SCENE 10: "Everybody knows that finals week is really tough"
As the star of the show keeps on singing (Medium-Long shot), another student rushes by in a panic. Her gaze follows the speeding blur with a hint of a cringe.

SCENE 11: "Although it's obvious, it's true."
Medium CU on the singer shrugging and smirking as she keeps on singing.

SCENE 12: "And though you'll be pulling..."
Mid-shot on a girl at a computer. She downs a cup of coffee.

SCENE 13: "All nighters..."
ECU as she slips into unconsciousness

SCENE 15: "...do your homework. Try to finish."
Back to a CU on the AD, who nervously glances around.

SSCENE 16: "...don't forget when it's due"
Returns to that initial setup with the singer between the rows of students, in the spotlight, belting out her grand finale.

SCENE 17:
Cut to a profile view of AD grinning as the house lights come up. Then, one of the kids in front of her turns around and asks, "Hey, don't YOU have homework?" AD deadpans, then curtains.

And by curtains, I mean blackout. Curtains is just one of those theatrical idioms I've been slinging lately. Might be nice if I did use a real curtain graphic...

Posted by Zelda Vinciguerra at 5:24 AM No comments:

Puttin' on the Ritz

Fiiiiiiinally finished the rotoscoping. Here's the glitchy Muybridge guy looking semi-swank in something vaguely resembling a top hat, tie, cummerbund, and an oddly skintight tux. Seriously, he needed pants and a hat, because everyone just looks better in a hat. Though if Muybridge were around now I'd probably chuck something large and heavy at him for stopping the walk cycle at fifteen frames, because that's what's making it glitch up. That is, assuming I'd be able to lift something large enough and heavy enough to do any damage, which I'm probably not.

And I got carried away here. Yes, that's me prancing about like a booftard and wearing a cowboy hat. If you've ever seen me in queue, then you've probably seen some sort of "subtle" variation thereof. And yes, it took me the better part of this weekend to trace it AND figure out how to chop up the film so I could get the part I wanted to export. Choreography credits go to Nate Taylor, though he probably doesn't remember ever teaching me this ridiculous dance in the first place.

That said...my hat is cooler than yours.
Posted by Zelda Vinciguerra at 5:10 AM No comments: