I haven't had very much time to do anything for this class between yesterday and the day before, as I was finishing up a research assignment for 20th Century Art, which took up most of Monday and Tuesday. And this weekend, as you may or may not have heard last post.

Aside from browsing about for ideas for my hypothetical animated lounge singer dress on Google. I have a very strong suspicion it's going to be one of those black tie sort of outfits, with a standard-issue, straightened updo. One of those outfits that would be strange to see in Monty even with my crazy dress standards.

Oh, ampersand-pound-percent...I have rehearsal during the Hallmark presentation...both of them. I guess that's what happens when you're starring in three films and an animation.

Oh yeah, and I finally made a puppet animation that seems to work. And it WAS a lot easier when I figured out to animate the head first, then the foot, and then the spring. It made the spring seem to animate itself almost.

Posted by Zelda Vinciguerra at 5:09 AM No comments:

The Power of USB

So after a grueling weekend of "fun" at the library doing 20th century research, I made the puppet for my second puppet jump (still haven't done enough of this research despite everything, which is making me concerned). It may actually look very familiar if you've known me for a while. 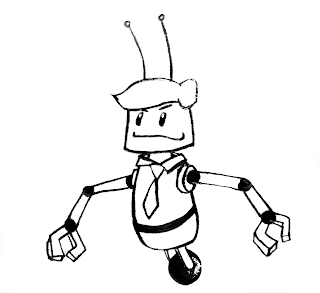 This thing is an Algebot...a moderately adorable little robot programmed to save money on math teachers. At one point an evil warlord ordered several thousand of the little guys to enslave a rival city, only to find that all they can do is teach math, and that he just wasted a ton of money.

They also happen to jump.

So ja...I have about ten or so plot concepts I've been developing just sort of jumping around in my mind at any given moment, most of which are absolutely ridiculous in what I hope is a good way. Though I'm still going to settle on my own singing for this class, as it is far too good of an opportunity to pass up.
Posted by Zelda Vinciguerra at 5:07 AM 2 comments: 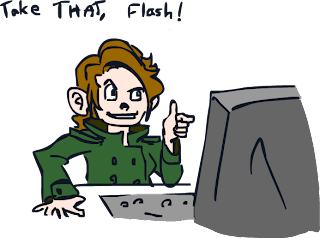 I just decided to set the ease slider and the ease graph aside because they weren't doing what I wanted them to, and do the timing myself. NOW I'm getting something that looks more like a clown puppet jumping, though he's getting a bit more air than he needs to. It's far from perfect but it's closer than I'd been getting.


I hope the rotoscoping goes a bit easier than this did. Three posts within one class period seems a bit excessive. And I still need to make a puppet of my own...

And as for my concept for the final, I'm definitely going to do something with that song, and some idiot prancing around the building singing it while other people are trying to finish their finals, like some kind of Montgomery Hall Lounge Singer. If I could get a pianist to accompany me that'd be swank.
Posted by Zelda Vinciguerra at 6:57 AM No comments:

Eh, Getting There, I think. Maybe.

This time I made the head a symbol and used a guide, though I'm still not quite sure what turning it into a symbol did...or what I can do with it when it's a symbol. Then after tweaking the ease-in/out slider with the head, I tried to match up the feet with a motion tween and more incessant keying.

The result was something that looked more like jumping and less like tweening but still seemed to lack a sense of weight.

Posted by Zelda Vinciguerra at 5:46 AM No comments:

Okay, so I don't know what I'm doing.

I should have known that bouncing ball would be deceptively cooperative. Flash, don't go all Maya on me. Please.

It's the puppet. I can't get the layers to parent to each other, or whatever the Flash equivalent thereof happens to be. It must have something to do with symbols. I put the head on a guide like the ball, but then I had to animate the spring and the foot keyframe...by...keyframe...by...keyframe. Clearly I am doing something very wrong because I'm making too much work for myself and coming up with rubbish like this.

This is not a submission of any sort. This is me not knowing what the heck I am doing.

On an unrelated note, I have rehearsal today. Yay!
Posted by Zelda Vinciguerra at 4:37 AM No comments:

Bouncing Ball and This Weekend's Progress

Flash, I've decided, is a lot less temperamental than Maya ever was.

^ And this is the one I used the graph for. Surprisingly enough that graph wasn't particularly difficult to find on the interface.

As for what I did this ridiculously long weekend, I was quite a bit preoccupied and couldn't accomplish very much in terms of this class, as I was taking care of some rubbish outside of town.

I did, however, unearth a rather cheesy Finals Week song I'd been writing back when I was toting Finals Week as a holiday...which I'm still doing, by the way. It was set to the tune of "Chestnuts Roasting on an Open Fire" and some of the lyrics are a little whacked, but I would totally animate something to my own voice singing that. It went something like this...

They know exams are on their way,
And they'll all scramble, rush, and try to get an A.
And their professors sigh, because they know
That those assignments were assigned weeks ago.

Everybody knows that finals week is really tough.
Although it's obvious, it's true.
And though you'll be pulling all nighters for days...
Do your homework.
Try to finish.
Don't forget when it's due.

Dang, I'm Getting Ahead of Myself

So now I'm really supposed to be posting illustrations in this post. Very well then, I'll start off with some more of Nicolas Sure's artwork. 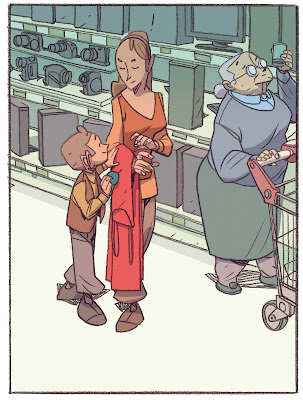 I also really like Enrique Fernandez's work quite a bit, and I'm uberly-jealous of my friend Jon, who managed to find all of the "Le Magicien d'Oz" books he illustrated during the France trip. 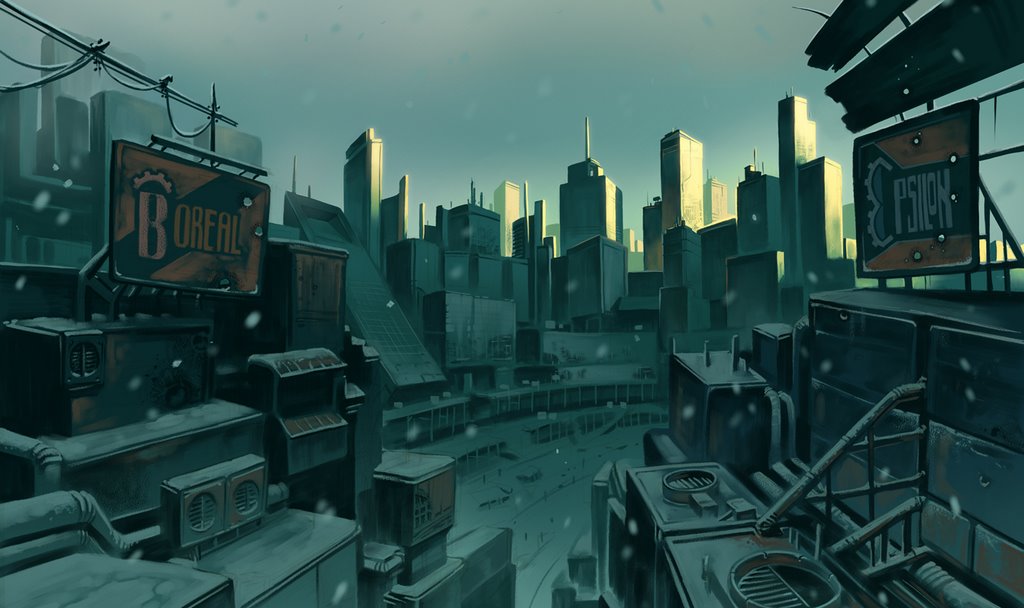 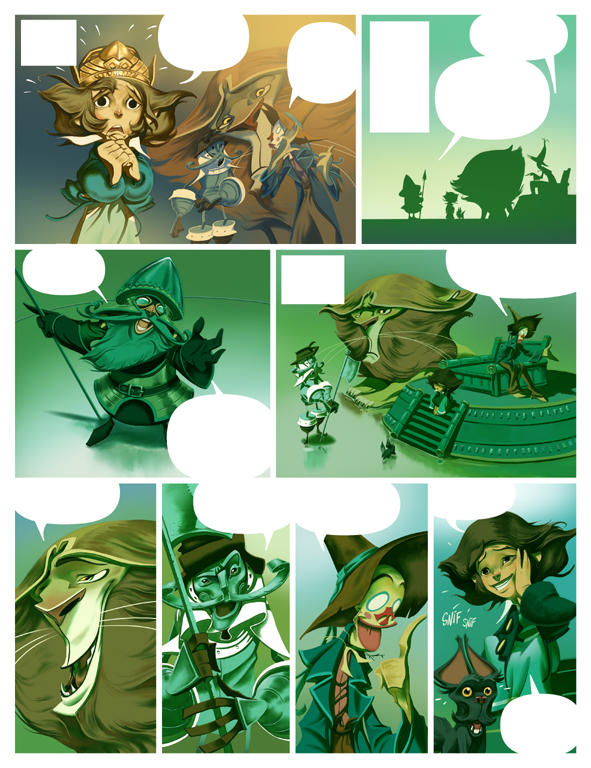 I also really like the way David Lillie works with lighting and setting the mood for his work.

Posted by Zelda Vinciguerra at 5:35 AM No comments:

As far as animation goes, like I've said before, I'm more into 2D than 3D. Looking at a lot of my favorites, I tend to look at content more than form, and a bunch of them seem to reflect my music background (six years of school choir, including honors choir, and two years of musical theatre).

I've always liked Warner Bros.' old-school exaggerations, and while this clearly isn't their broadest, most exaggerated short, the reason it stuck with me through my life was the notion that I'd always known I could sing better than that little owl could, and his dilemma was something that a lot of artists could relate to--the notion of being able to do our own thing versus the standards that our employers, peers, and pretty much everyone around us expect.

The thing that really impressed me with Pipe Dream was the way that everything synced up so well with the music that it gave the sense that all these balls were actually causing the music. Not so big on the lack of a tangible plot, though.

I don't think I can fairly discuss my favorite animations without inserting an episode of Rocko's Modern Life. This show was what got me into animation in the first place--more specifically the "Wacky Delly" episode, which literally had me trying to make my own cels out of watercolors and saran wrap at the age of about ten. Sadly I couldn't find a clip of the actual episode, at least not at a normal speed, but the whole series' brand of humor--hilarious, yet not so ridiculous that it just wound up gross, like Ren & Stimpy did, so I put up what I could.

I actually really like the sort of animations that give you a peek into the animator's world, as they're quite a bit more entertaining than just watching documentary, behind-the-scenes bits on DVDs. Tiny Toon Adventures did this a lot, too. Granted, those are interesting in moderation...I just find these more entertaining, even though they're not quite so informative. The stick figure also has nice weight, especially when he's swinging off the cursor. And...even though this isn't an animation, ever since reading this in France my character designs have been influenced by this comic, Neverland, illustrated by Nicolas Sure. The little guy on the left in the rightmost bottom panel keeps lending himself to my own characters.

Actually, thinking about this harder, I should probably be writing "Animation: The Musical." If only I knew how to compose music.
Posted by Zelda Vinciguerra at 5:34 PM No comments:

Ladies and Gentlemen, May I Have your Attention, Please?

My name is Zelda Vinciguerra. I am a third-year animation major at the Savannah College of Art and Design with a minor in performing arts. I enjoy 2D animation and voice acting immensely...and I can sing and learn accents. I also sound roughly like a ten-year-old boy and am more than willing to voice act whenever the opportunity presents itself. In fact, if you ever hear some girl belting showtunes around the third floor of Montgomery Hall in the dead of night, there is a 90% chance it's me. Unless, of course, it sounds horrible.

I just got back from spending a quarter at the Lacoste campus. My favorite colors are yellow and pink. I don't like animals at all, but if I had to own one I'd get a cat. I'm really good at grilling and frying things. My favorite food changes constantly. I also like puzzles and logic problems. I'm not very good with computers, so I anticipate needing a lot of help over the quarter with the software. I've had experience with frame-by-frame animation in Flash, but I don't know anything else. Scripting confounds me. I want to change this by the end of the quarter.

Thank you, thank you, no autographs please. *Bows*
Posted by Zelda Vinciguerra at 6:16 AM No comments: